Skip to content
The PIRI 100 2020: How luxury residential markets have performed and why

The PIRI 100 2020: How luxury residential markets have performed and why

We reveal the 2020 results of the PIRI 100 – our unique Prime International Residential Index – and investigate the key trends shaping luxury global property markets.

“The drive for wellness and wellbeing heightened the appeal of waterfront homes in Sydney, creating a significant price premium in 2020″ 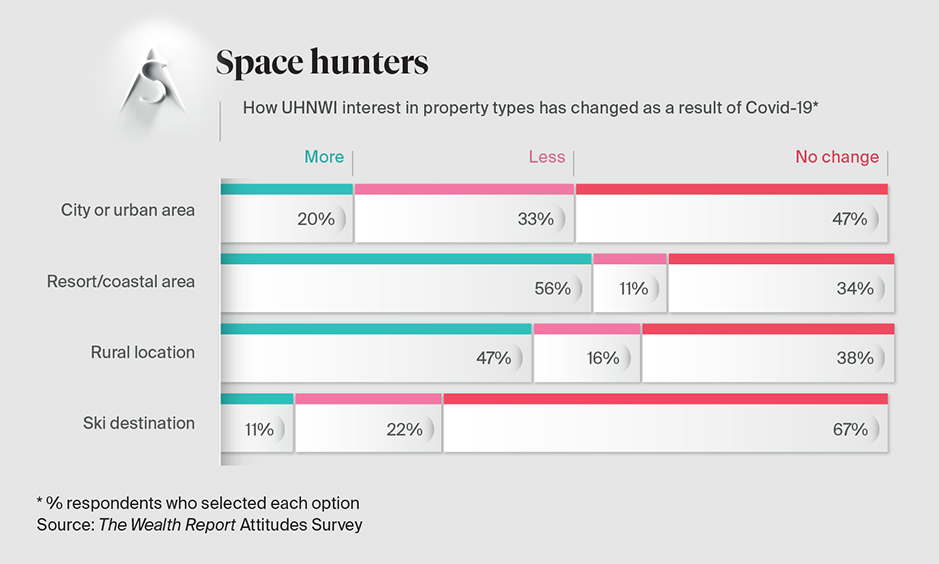 This positive headline conceals a more nuanced picture. In 2020, 29% of locations saw prices decline year-on-year, up from 21% in 2019. Conversely, five markets registered double-digit price rises in 2020, compared with just two over the previous year. 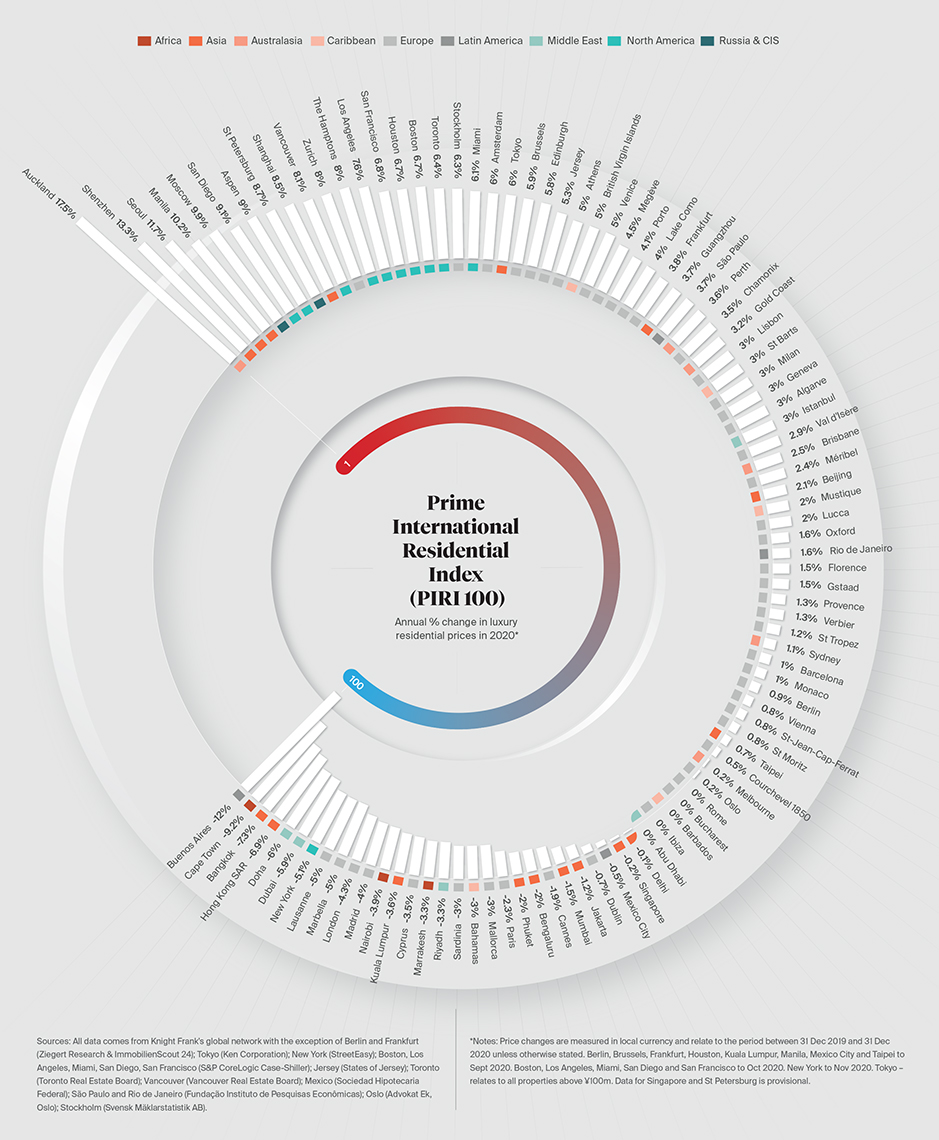 Auckland leads the index with average prices ending the year 18% higher. New Zealand’s handling of the Covid-19 crisis, its rapid economic recovery, ultra-low mortgage rates and a limited supply of quality stock were behind the surge. Expect some intervention in 2021 as the government looks to rein in price inflation by tightening lending rules or raising taxes.

Asian cities occupy the next three rankings: Shenzhen (+13%), Seoul (+12%) and Manila (+10%). The speed at which some Asian cities, particularly Chinese Mainland markets, rebounded was the surprise trend of 2020. By 26 March, property sales volumes across 30 major Chinese cities had returned to the average daily levels observed in 2019, according to data from Capital Economics.

Despite Asian markets occupying a number of the higher PIRI rankings, Australasia and North America were the top-performing regions in 2020, averaging annual growth of 4.9% and 6.3% respectively. Both regions saw a surge in pent-up demand as lockdowns eased and homeowners re-evaluated their lifestyles.

Perth (+4%) was Australia’s frontrunner, and Sydney (+1%) registered its highest volume of prime sales ever in Q3 of 2020. Grounded by travel bans, Australia’s luxury buyers focused on building their property portfolios at home, buoyed in part by the country’s bullish stock market.

In North America, from The Hamptons to Florida and Aspen, suburban space, coastal retreats and mountain air were in demand. Ten of the 11 North American markets tracked in the PIRI 100 sit within the top 20 rankings, with San Diego out in front. Palm Beach was a key super-prime hotspot in 2020, recording 20 sales above US$20 million, up from ten in 2019.

New York (-5%) struggled to gain momentum in the first half of the year as the pandemic took hold, but finished on a more optimistic note with the number of signed contracts in Manhattan up 14% in December year-on-year, and listings down 31%. Low construction volumes mitigated larger price falls. The Real Estate Board of New York estimates that total construction activity in 2020 was the city’s lowest in nearly a decade.

North of the border, 2020 marked a watershed year for Vancouver (+8%). After three years of declining prices – in part linked to higher taxes – its luxury sector got a reboot.

With overseas buyers absent, there was a perception of value among local residents keen to secure larger properties on more extensive plots. Toronto (+6%) saw a similar trend, but its turnaround was less dramatic.

Europe’s path was stop-start. Despite cities leading the results – Zurich (+8%), Stockholm (+6%) and Amsterdam (+6%) – the focus of transactional activity from June onwards was firmly on coastal, rural or alpine resorts, mirroring the pattern seen in the US.

In the Caribbean, the British Virgin Islands (+5%) leads, but prices are rising from a low base following the chaos wrought by Hurricane Irma in 2017. St Barts (+3%) saw a flurry of high- end sales and Mustique (+2%) experienced a record number of sales as the island captured the imagination of pandemic-weary UHNWIs seeking remote living in a secure and private idyll.

In the UK, an eight-week spring shutdown during the nation’s traditional peak selling season meant London (-4%) was playing catch up over the summer, while still contending with ever-changing travel restrictions and the shadow of a potential no-deal Brexit.

“Urban living remains aspirational in Asia. If you live in a major metropolis such as Tokyo, Shanghai or Hong Kong and want more space you buy a bigger apartment, you don’t move back to the countryside”

Once the property market was allowed to resume, a release of pent-up demand, boosted by a welcome stamp duty holiday, buoyed the market.

Rural retreats were a particular beneficiary with Oxford (+2%) and the Home Counties seeing strong sales activity as buyers sought more space. But none could match Edinburgh (+6%) and Jersey (+5%), where demand for large family homes surged.

Back in Asia, prime values in Singapore (-0.2%) fared better than Hong Kong (-7%), with the former launching the Variable Capital Company, a new corporate structure aimed at attracting hedge funds and family offices as part of its bid to be Asia’s leading financial centre.

Although Hong Kong saw several big-ticket sales in The Peak, its priciest neighbourhood, a weak labour market, several waves of Covid-19 and tensions between the US and China stifled demand.

Buenos Aires (-12%) occupies the bottom ranking this year. With properties priced in US dollars, but mortgages offered only in pesos, not to mention capital controls, buying property in Argentina is far from straightforward.

“2020 was a tale of two cities for New York. While suburbia was in the spotlight in the second and third quarters, activity picked up by the end of the year, especially in Brooklyn and Manhattan. Overseas investors are eyeing New York – greater negotiability means value, and rental demand is recovering”