Skip to content
The future cities leading in health, wealth and innovation

The future cities leading in health, wealth and innovation

For aspirational cities, a focus on innovation and wellbeing could be the key to attracting or retaining free-spending inhabitants. In a bid to identify the future front-runners in this race we have merged these two factors with our current measures of HNWI wealth to create our new City Trifecta.

Munich takes top spot in the Trifecta, compared with ninth place in the City Wealth Index

Helsinki tops the list in the City Wellbeing Index, up from third last year, closely followed by Madrid and Vancouver

Innovation drives economic growth and wealth. This is nothing new. But the importance being placed on wellbeing is something that is rising and has been catapulted to the fore by the Covid-19 pandemic.

Taking both these factors into account in addition to ranking where wealth currently resides, as measured by our City Wealth Index, will help determine the urban hotspots of the future: the City Trifecta.

For example, when we factor in its city innovation and wellbeing rankings, Munich takes top spot in the Trifecta, compared with ninth place in the City Wealth Index. Tokyo climbs to second from fourth.

The largest jump is from Edinburgh, up 28 places from its position in the index. Melbourne, Stockholm and Boston all see their rankings rise by more than 20 places, scoring highly for innovation and, in Boston’s case, also making it into the top ten for health.

In our sister report Active Capital, which offers insights into the dynamics of global real estate capital markets, we identified global innovation- led cities that will attract and retain talent and wealth, creating future opportunities.

The innovation score comprises four elements: quality of innovation factors; innovation infrastructure, such as the number of research organisations in a city; funding; and the drive to innovate.

Cities were split into tiers based on their scores. London is the sole occupant of the top tier, followed by Tokyo and New York in the second echelon. Seoul and Zurich are in the third and fourth tiers respectively, which boosts their City Wealth Index ranking by ten places overall.

In the 2020 edition of The Wealth Report we introduced our City Wellbeing Index. This year, we have refined the index, splitting it into four categories that influence decisions on where to live and invest: healthcare; safety; air quality; and sustainability. 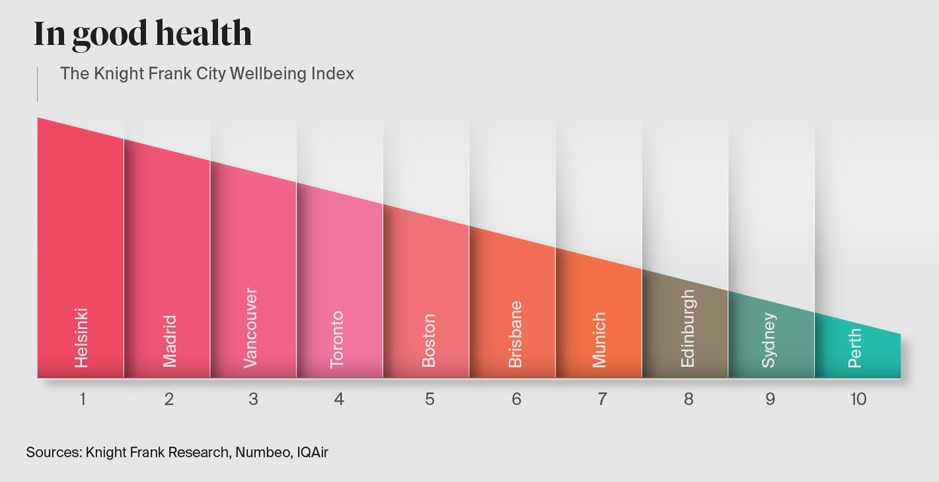 Helsinki tops the list, up from third last year, closely followed by Madrid and Vancouver. Europe still dominates, with four spots in the top ten compared with three each for Australasia and North America. Asia’s highest entry, Taipei, is in 13th place, although for the healthcare measure it comes out top.

For the sustainability element we again drew on research from Active Capital that looked at the number of green-rated buildings. London, New York and Los Angeles come out top for this element, yet lose ground on others such as air quality. 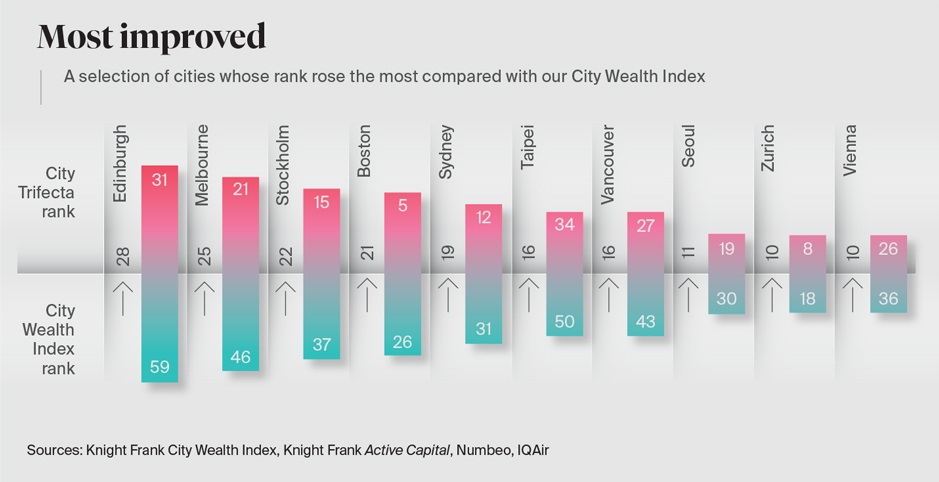 With national governments increasingly bogged down in efforts to placate polarised and hostile electorates, forward-thinking city mayors and leaders are taking the opportunity to facilitate and deliver meaningful change.

This has led to the emergence of new urban challengers jostling with more established cities in our City Trifecta.